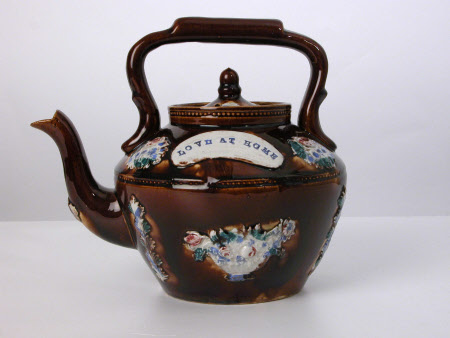 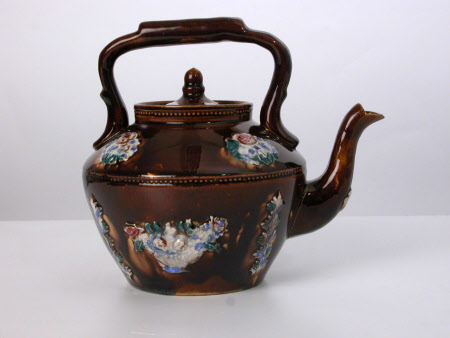 This distinctive type of ceramic became known as Bargeware, (or Measham ware) in relation to the shop where it was sold, located conveniently by a canal. The practical yet cheerfully decorated pieces were popular with nearby barge and narrow boat owners and became increasingly popular amongst the working classes in general for it was relatively cheap. It was produced from the 1860s to the early 20th century by factories in the Burton on Trent area, primarily by the factory Mason, Cash & Co. It is recognisable from its deep, brown glazing and from the modelled and applied decoration. The earthenware used to make these pots was easy to mould and fire, accounting for the stamped and incised decoration. Bargeware was affordable for most people and was often commissioned specifically to mark an event such as a marriage or anniversary. Often they are dedicated to particular people or mark specific dates. Although the glazing makes this ware watertight and therefore usable, the scale of most of these pieces – including this oversize teapot – indicates that they were probably displayed as decorative pieces rather than purchased for use. (Alison Cooper, 2018)